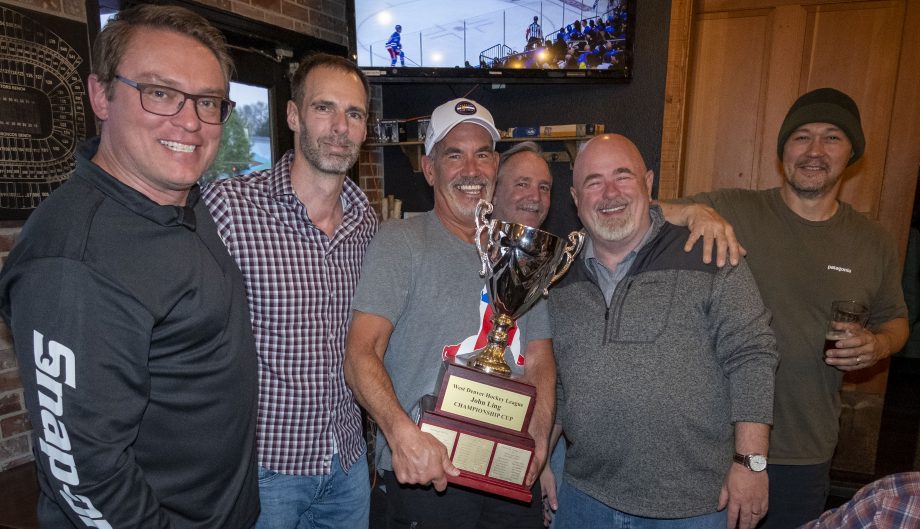 The West Denver Hockey League operates as a non-profit entity to provide a recreational hockey experience for older adult hockey players based on age criteria rather than skill level. The League is dedicated to providing a competitive, yet social experience. The League is open to both male and female players.

There are two season per year. The winter season starts in early October and summer begins in mid-May. Winter is a 20 game season with a double elimination playoff, summer is ten games with double-elimination playoffs. The winter season concludes in late April and the summer ends in mid-August. Registration typically opens in early August (winter) and late April (summer).

Teams are selected through a draft with an equal distribution of players of comparable skill level. (The speed of the league would range from E3 to E4 in the RMHL or so.) This provides networking opportunities and for new members, a chance to join a League where everyone can get to know one another. The number of teams competing is based on the player sign-ups.

A list of active subs is maintained and re-set each season.
If you’d like to play as a sub, please fill out this brief form & pay a small fee.

Prior to each season the League registers players, rates each player by ability as best as possible, and then organizes a player draft to select teams. The objective is to achieve comparative parity among

The WDHL is a continuation, with minor changes, of the Southwest Denver Oldtimers Hockey League (SDOHL.) The SDOHL was formed in 2008 by John Ling who retired in spring of 2021 and transferred the league to Joe Mahoney.

If you would like more information about our League. Please email at westdenverhockeyleague@gmail.com or call (303) 489-6500 (Mondays & Thursdays.) Or fill out the form below.

Games and drop-in skates are played at Foothills Ice Arena in Lakewood, Colo.

Thank you for your interest.

The West Denver Hockey league is an co-ed adult social league for players over 40 years old.
To encourage the social foundation of the league, teams form via a draft for the 20-game winter and for our 10-game summer seasons. The league plays on weeknights (usually Mondays and Thursday) at Foothills Ice Arena. There is a regular Sunday evening drop-in game.
Learn more about the league here.